How Low can you Go!? Ceiling Heights in the Building Code

Home » Articles » How Low can you Go!? Ceiling Heights in the Building Code

Recently one of our clients was put in a tough spot by an inspector.  The inspector was doing his job, trying to keep the house as safe as possible and after further discussion agreed with us that the design we had worked out with the client was per the IRC and local amendments.

The debate centered around a common occurrence in bedrooms made in 12/12 pitched attics that have been converted into second floors.  What to do with that little triangle of space 5′ or so from the edge of the exterior wall?  Some clients block this off while others like the open feel of leaving it exposed.  The inspector asserted that it had to be blocked off, so we did the code research and found that it did not have to be blocked off, and more importantly diplomatically convinced the inspector to let our client move forward with his code compliant preference.

The inspector citing the IRC sections below directed our client to install walls (Where the sloped ceiling was less than 5’ tall.)

Our client had done quite a bit of work to remove those walls by engineering and reinforcing the roof so that they were no longer necessary for the roof structure. The objective was to give him a more open floor plan on that level.

As a result of this objective we clarified our interpretation of the IRC with the inspector to make sure those walls were absolutely required by the codes adopted by the jurisidiction and summarized the referenced codes to make their analysis as easy as possible.

Based on our interpretation of the sections they cited we completely agreed that these parts of the room will not contribute to the Code Minimum Habitable room area of 70sf.

Fortunately even without the areas lower than 5′ tall these rooms were over 80sf in area in just the 7’ tall portions of the room.  According to 305.1  even more additional area could be added to the rooms if it were needed, which it was not.

As this area is not needed to meet the minimums the extra area would by our interpretation be portions of the room that are not habitable area.  They can thus be used for Storage etc per the IRC definition of Habitable listed below.   Looking at 304.4 we can infer from the sentence “Portions of a room with a sloping ceiling measuring less than 5 feet” that these “portions of a room” are allowed but simply not counted toward the minimum.

We also found an image online pulled from the Commentary in another jurisdictions presentation which supports this line of thinking and have included it below.

HABITABLE SPACE. A space in a building for living, sleeping, eating or cooking. Bathrooms, toilet rooms, closets, halls,storage or utility spaces and similar areas are not considered habitable spaces. 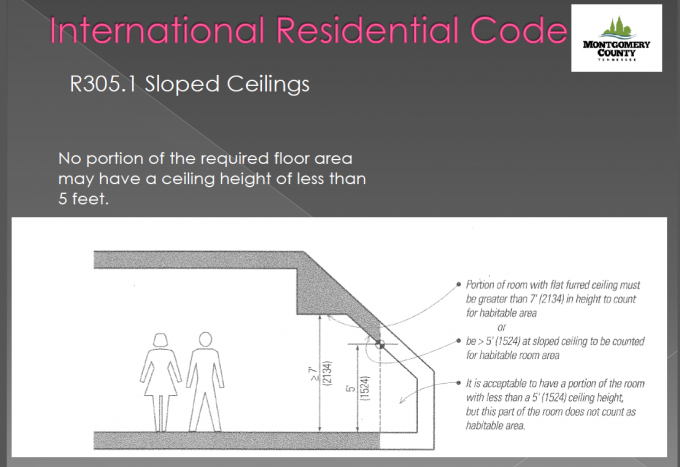