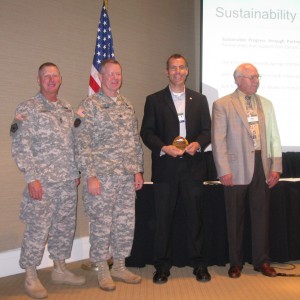 Landscape Architect and Urban Designer John Olson, who works with the Sustainable Fort Carson Team, is a strong proponent for holistic Sustainability and Smart Growth. He serves on the Colorado Springs Downtown Review Board, as the Vice-Chair of the Colorado Springs Urban Renewal Authority and was recently appointed to the Mayor’s Streetscape Solutions Team.

Bob Mooney integrates the Installation’s sustainability and Net Zero goals in the decisions he makes every day as Project Director at Balfour Beatty Communities. He implemented landscape modifications for future neighborhoods that resulted in 65% decrease in water needs, increased residential recycling from 5 tons per month to 21 tons per month, and diverted thousands of tons of appliances, concrete, asphalt, carpet padding from the landfill.

Ann and Eric Fetsch, both individually and as a team, champion people and the built environment through service to Catamount Institute, USGBC and through mentorship and advocacy in the Pikes Peak region. Recent success include planning and implementing the certification of the first LEED H show home in Colorado, and a Sustainability Bike tour of Colorado Springs that showcased the city’s many sustainable features.

Donald P. (Phil) Chase achieved an 80 percent waste diversion rate for Peterson Air Force Base where he also oversees a successful green procurement program. His efforts in recycling scrap metal have earned over a million dollars for a Qualified Recycling Program. Chase is currently developing composting methods, to date resulting in a 25 percent reduction of organic waste in Peterson dining facilities.

Greg Willis and the team at the Cheyenne Shadows Golf Club saves more than 20 million gallons of water each year through water conservation innovations. The team continues to show their dedication to preserving natural resources by re-using asphalt from old paths, composting grass clippings and recycling. Jessica Frank, Fort Carson’s Directorate of Public Works stormwater program manager, works with the U.S. Army Corps of Engineers to improve stormwater drainage designs that will benefit the Post for years to come. Her efforts help reduce pollution runoff from construction sites into the Fountain Creek watershed and protects the community from stormwater pollution.

Carrie McCausland, sustainability coordinator for the City of Colorado Springs, educates about sustainability through inspirational “lunch and learns” events, projects such as the Urban Forest Tree Tour, mural painting along Interstate 25, City Hall garden, and the “Green Greetings” newsletter that reaches 5000 stakeholders. Her passion for recycling lead to the successful implementation of recycling bins in downtown Colorado Springs.

Nick Kittle, manager of Innovation and Sustainability at City of Colorado Springs, is the co-founder of the city’s “Green Team”. Under his direction, the city received $4 million in grant funds to support energy efficiency, and was recognized as having one of the largest municipal biodiesel programs in the nation. Through a combination of initiatives, Nick was instrumental in reducing emissions in the Pikes Peak region by more than 5 million pounds of carbon dioxide, saving hundreds of thousands of taxpayer dollars.

Captain Daniel J. Kull, commander of Headquarters and Headquarters Company U.S. Army Garrison Fort Carson, added sustainability awareness training that reaches approximately 9,000 Soldiers each year on topics such as recycling, reduction of energy use, and use of sustainable transportation. He also established a free bike share program that provides mobility and cost savings to Soldiers and reduces greenhouse gas emissions.