Gross vs. Net ….are your Toilets in…or Out?

Home » Articles » Gross vs. Net ….are your Toilets in…or Out?

While doing the code analysis for two buildings with a mix of Assembly and Business occupancies the following question came up….Restroom area… in or out?   We had the restrooms included in the original code analysis area, which is correct in a Gross sf calculation but I couldn’t remember why I had taken these out in the past other than common sense.  People don’t go to a building to hang out in the bathroom…normally. 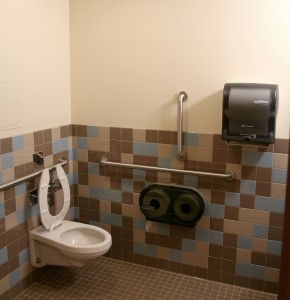 It took some digging but I found it…in an often overlooked part of the code….definitions!

FLOOR AREA, GROSS. The floor area within the inside perimeter of the exterior walls of the building under consideration, exclusive of vent shafts and courts, without deduction for corridors’ stairways, closets, the thickness of interior walls, columns or other features. The floor area of a building, or portion thereof, not provided with surrounding exterior walls shall be the usable area under the horizontal projection of the roof or floor above. The gross floor area shall not include shafts with no openings or interior courts.

So if you are doing an occupancy that is Net(such as assembly), then you don’t include much of the building like the restrooms, corridors, mech etc.

If you are doing an Occupancy that is Gross(such as a Business), then you include pretty much everything.

If you are doing a mixed occupancy…..it gets a bit more complex and opinions vary but the most defensible position is if a corridor leads to the Business area and the bathroom on it serves the business area, then it is included in that occupancy and plumbing calculation because this is a Gross Calculation.

This might make you think you could be clever and do a small A occupancy to eliminate a big corridor and bathroom, but an A occupancy under 50 people or 750 sf is considered a B occupancy.