“We Have A Winner”, Alex Knuth Named Sexiest Inspector Again for 2016

Home » Articles » “We Have A Winner”, Alex Knuth Named Sexiest Inspector Again for 2016

Another year and another win for Alex Knuth Senior Inspector, named as EVstudio’s Sexiest Inspector. Again, EVstudio opened up the challenge not only nationwide this year but also worldwide to find the Sexiest Inspector and again Denver’s own Alex Knuth has come out victorious. This is Alex’s second win in as many years. Alex has shown his poise with the first win and is humbled by the second win. His co-workers and clients could not be happier for him and this back to back win. 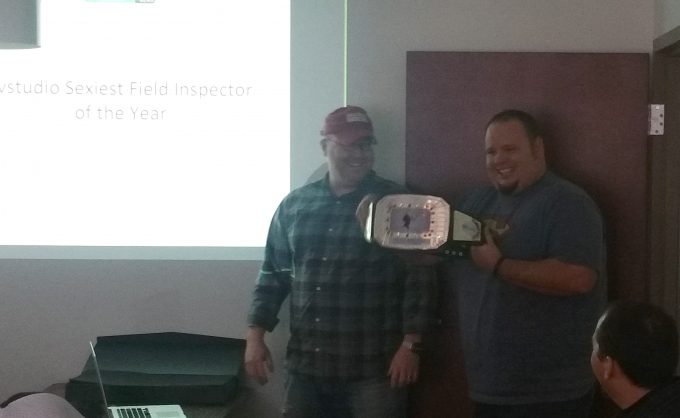 This year’s competition started off with taking the person’s professionalism into account first. When asked Structural Engineering Director Jim Houlette stated, “I have to have 100% trust in him and what he is inspecting for this office, he has never let me down.” When asked about his professionalism in the field Jim also responded with, “He (Alex) came from the field and knows how to talk to the people in the field, he can translate our (EVstudio) technical information very well to the guys that may not understand it.”

But let’s be honest, it is the sexiest inspector award, so looks do have something to do with it. Tiffany Binkowski, Design Engineer had this to say about him. ” I sit right across from from him and when he is here in the office, sometimes i find myself just staring at him. It is really easy to get lost in his eyes.”

Principal Architect Sean O’Hara had the privilege of announcing the win at a company-wide meeting in January. I was able to catch up with him right after the announcement and he had this to say, “It was a rough search for the winner this year, to be honest the  cards were stacked against Alex as a repeat winner, but he still ended up on top and victorious.” He was also asked about his thoughts of it being  back to back wins, “I don’t throw this around lightly but I think we may have a dynasty on our hands. I mean look at him, he is going to be hard to beat.”

Assistant Director of Structural Engineering Ross Maxwell had this to say, “When I need to send someone out to look at an issue on one of our projects I always go to Alex. He is the one I respect and trust the most to get the problem solved in a timely manner. And honestly everyone is happy to know it’s him coming out to inspect because they know he will do a good job and most of all he is easy on the eyes.”

I was finally able to catch up with the winner and he had this to say, “I am truly honored to win it once but would have never thought that I would pull off back to back wins. This win is for everyone at EVstudio, we are a team and work together very well. It has been hard to get to the gym 4 to 5 times a month and cut the fast food back to 5 times a week to keep this winning physique.” I pushed him on Sean’s dynasty thoughts and he had responded with this, “Well I guess he is right, until I am beat, I am top dog.”

I was also able to get in touch with the lucky Mindy Knuth, Alex’s wife by phone to get her take on the win. “I am happy for him; I know he cherishes this honor. I also am happy to know that the Sexiest Inspector comes home to me every night, I would be lying if I didn’t have him wear the hard hat and vest for me every once in a while.”