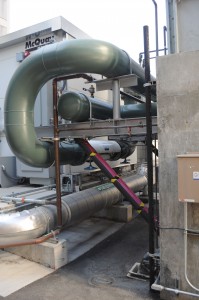 Let’s look at the reason why there may be trouble.  Let’s say you have a chilled water system with a volume of 170 gallons, which is below the 210 gallon minimum.  Let’s also say that the chilled water has a design supply temperature of 45 F and a design return water temperature of 55 F.  When the chiller starts, it will run for a minimum of three minutes.  But with a flow rate of 70 GPM, the entire volume of chilled water will be circulated in approximately 2.43 minutes.  If this happens on a day during which cooling is required, but less cooling is required than the maximum design conditions the chiller system design was based on, we may wind up with a return water temperature which is less than the design  55 F.  If this cool return water temperature enters the chiller, it could be over cooled.  If the water is cooled too much, it could potentially cause the chiller’s internal cooling components to freeze up.  The chiller won’t actually let this happen.  Instead, it will shut itself down before freezing and potential damage occur, but this shut down often requires that a maintenance individual manually reset the machine.  Most maintenance personnel don’t just sit around waiting for a chiller to shut down and require a manual reset, so it can often take several minutes for someone to show up (usually having to leave other problems they were dealing with in a part of the building far away from the chiller), diagnose the chiller shutdown, and then reset it.   During the time the chiller is shut down, there is still a necessity of cooling, so the chilled water keeps circulating.  Since the chiller is stuck in the off position and can’t provide 45 F water, the chilled water will begin to warm up beyond the 45 F design temperature, and cooling control will be lost.  Even if the chiller is manually reset and is able to provide chilled water again, since there is less chilled water volume than is required, the same chiller shutdown can occur again and again.