Recently, a gentleman got in touch with me about adding a safe to his home.  When he selected a model, the vendor told him delivery was included — but they weren’t going to be able to get it down the stairs into his basement.  Since he didn’t want to put it in the garage, he contacted his builder to see if he could put it in the study, and they told him to contact us. 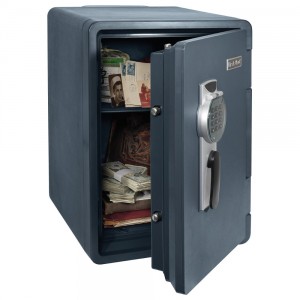 Now, before we get too involved, this was a real safe, not a sheet-metal box with a locking door.  Even though the footprint was small (32″ x 26″), it weighed 850 pounds, so the homeowner had a reason to be concerned.  If your hobby isn’t lifting weights, but you can move your “safe” by yourself, this article probably isn’t for you.

So, what goes into deciding if you can add a safe at any point in your home?  The first question is where you want to add it.  Basements are generally a first choice, partially because there is unfinished space that can easily accommodate a large piece of not-terribly-attractive furniture.  Ground floor rooms such as studies and libraries are also common, as are upper-floor rooms such as bedrooms and master suites.   There are many pros and cons for each of these locations; a quick internet search will turn up excellent articles discussing why a specific room may be a good choice for your safe, its contents, and your home.

The second question is what you’re going to store: even a lot of paper is relatively light, compared to a similar volume of silver coins.  Having an idea of what you’ll be using your safe for (even if you don’t disclose this to your engineer) will help you make an informed decision about what, if any, structural modifications you end up making.

The third question is what you’re going to be using the rest of the room for, going forward.  A bedroom or closet probably won’t have additional furniture loading the joists, but a study or library could have filing cabinets or bookcases loading the same structural members.

Returning to the gentleman that contacted us, we examined the framing underneath his proposed safe location.  He had chosen a location in his study, and it was clear that, without modifications, his floor would support the safe — but only if it was virtually empty, and the wall was blank.  We provided three modifications:

Since the floor was able to support the light load without modification, his install was able to proceed on schedule.