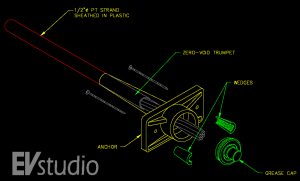 There are three major systems that post-tensioners specify in order to protect the tendons from the ravages of air and water.  These are the sheathing, the coating, and the encapsulation system.

The sheathing is the most obvious part of the system.  The Post-Tensioning Institute‘s Specification for Unbonded Single Strand Tendons states that sheathing must have a particular minimum density and thickness, largely to prevent normal (and somewhat above normal) shipping and handling from cutting through the protective plastic.  All tendons destined for elevated deck projects have a minimum sheathing thickness of 0.05″ (1.25mm), and all major manufacturers use seamless extruded sheathing to forestall a split seam giving water a path to the strand.   Additionally, most manufacturers color their sheathing brightly, partially as a branding activity (you can tell who did a job driving by the site), but also because nicks that go all the way through are easily visible.

In the field “post-tension material coating” is otherwise known as “grease”.  This is a sticky, smelly semi-liquid that is specifically formulated to repel water.  The main purpose of the grease is to lubricate the tendon so that it slides freely in the sheathing, but it serves two other important purposes as well.  First, since it’s viscous and repels water, it forms another barrier between the environment and the steel strands — “wiping off” the grease requires not only effort, but generally a solvent as well.  Second, the grease completely fills the sheathing, leaving no room for water (or humid air) to linger near the steel.  The specification mandates a specific density of coating, and a minimum mass of coating per 100 feet of finished tendon.  That ensures that the gap between the steel and the sheathing is big enough for the tendon to actually move during stressing.  Lastly, the grease is usually dark brown, dark green or black, so that if the tendon is nicked, the grease spots are easily visible against the brightly-colored strands.

This brings us to the encapsulation system.  There are three terms that deal with encapsulation on post-tension projects (and post-tension material supply bids): standard, encapsulated, and fully-encapsulated.  “Standard” means bare cast iron anchors, “Encapsulated” means plastic-coated anchors with tubes to bridge the gap between the anchor and the sheathing, and “Fully-Encapsulated” means that any void has been (or should be) pumped full of coating prior to placing concrete.  All “encapsulated” type anchors come with a cap (also filled with grease) that is snapped over the end of the strand once the steel has been cut off.

Encapsulated anchors are tested by assembling the various components (with a white grease) and submerging them 3′ under water (marked with a red dye) for 24 hours.  If they leak — that is, if there is any red in the white grease — they fail.

When I started my career, many suppliers used standard anchors in locations where there would never be water — inside of residential projects, for instance — and only upgrade to encapsulated anchors when water might be an issue — parking slabs, balconies and roofs.  More and more engineers have specified all-encapsulated systems on projects since then, and in 2011, the PTI issued Addendum #3 to the specification, which mandates the use of encapsulated tendons at all locations covered by ACI 318 (essentially, all elevated slabs).  This change will presumably be included in the specification update later this year.

EVstudio, of course, has always specified fully-encapsulated systems for elevated decks.  The small additional cost per anchor comes with a great increase in durability — not to mention, peace of mind.